A local “photo opportunity” Aug 22 for our city councillor Pam McConnell (and also for the new boss at Police 51 Division, Superintendent Kimberley Greenwood): the unveiling of an attractively landscaped pie-shaped piece of land immediately north of the crosswalk at Shuter & Sumach. The garden and grass area are approximately 1400 square feet and cost $35,000. Lots of police in attendance at this ribbon-cutting ceremony, including at least 2 constables equipped with Tasers (fortunately, the small crowd was well behaved). 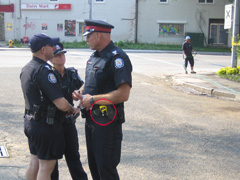 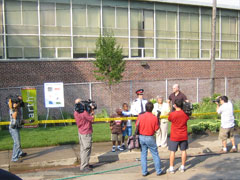 Previously, a larger garden was built just north of here, in the spring of 2006: “a memorial flower garden for people killed in Regent Park. The garden was created and is tended by community leaders in Regent Park, with the involvement of youth who are at risk of becoming involved in crime and violence.”

Now, if only the city could be prodded to make similar landscaping improvements at other nearby TCHC properties, such as the fence and gardens surrounding Moss Park Apartments, those residents could similarly “take pride” in their neighbourhood. 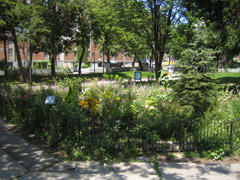 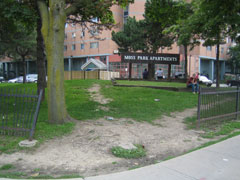 This entry was posted in politics. Bookmark the permalink.