dump everything in the East Downtown 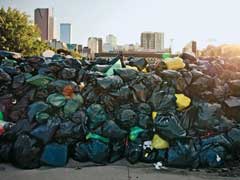 The July 21 Toronto Star reprinted a chart showing the capacity of existing and planned temporary garbage dumps in Toronto. Throughout most of the city, dumps in parks are limited to paved areas (to limit leaching of nasty toxins into the ground). However, in Moss Park, the city plans to use every square foot of the park, if necessary (107 x 122 meters). Moss Park’s capacity for garbage is listed at 3,500 tonnes, substantially larger than any other site, and more than twice as large as the Sunnyside Park site. Dog walkers, soccer and baseball players who use Moss Park – speak up now (or suffer the health consequences in 6-12 months’ time. Bravo to Councillor Kyle Rae and Pam McConnell for protecting the interests of their constituents. Why doesn’t the city use the large paved area it owns at 100 Queen W, as a temporary downtown garbage site?