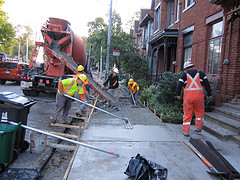 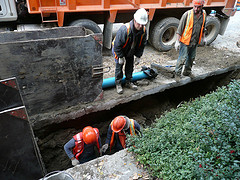 Well, we finally have real smooth cement sidewalks again on Shuter.  This is a big improvement over the uneven ashpalt patched walkway, which we had to endure for exactly 11 months. For some unknown reason, last fall a replacement watermain was placed underneath the sidewalk instead of the usual location – beneath the street. (We emailed Pam McConnell and inquired why; no response). Some private walkways were damaged by this construction; a resident emailed Pam in June 2010 asking when repairs to her property would be made (again, our city councillor and her 4 staff were too busy to answer). Who knows when Sumach St sidewalks, also torn up last year for watermain construction, will be restored to normal.

Let’s see how long it takes for permanent repairs. And whether they also repair similarly uneven Sumach sidewalks north of Queen. The city’s response is amusing (“utility company”); since the sidewalk damage was done by the city itself, when replacing water main 16 months ago: ‘ … poor condition “most likely stems from a temporary utility-cut repair.” If so, the utility company will be contacted to make remedial repairs ‘