BIA? – up to local businesses

As a course project, a team of Ryerson undergrad students recently studied the “opportunities for enhancement of the public realm, a strengthened business base, and a safer community for Corktown”. As one of the few Trefann Court residents who attended the students’ April 13 presentation; I was shocked to hear that one of their suggestions was a new BIA (business improvement area) for Corktown: the area bounded by Berkley, Queen, River, King and Eastern / Front Streets. Call it “Son of Queen East BIA” – will this be another horror story? Long-time Trefann and Corktown residents may know some of the seamy history of a previous BIA attempt; I’d like to share my recollections. (In writing this, I couldn’t easily find any information on the www.corktown.ca website about the 2007 BIA, but at least Google provides a few links. For further BIA details, check the Trefann email list, circa 2006 – 2007.) 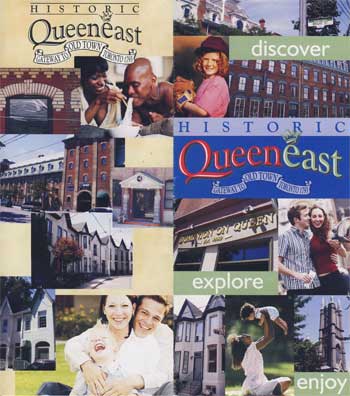 A significant portion of the $15,000 of Section 37 money given to the city by Shoppers Drug Mart (for permission to build their store at Queen & Parliament) was spent in 2006 on a brochure promoting concept of a Queen East BIA. An organization that I thought was already defunct by this time – QUEBRA – publicly endorsed the BIA, along with the CRBA. It was rumoured that one CRBA board member who was promoting the BIA was simultaneously jockeying to become the paid staff person for this new BIA.

Most informed Toronto residents know that downtown Queen Street East does not have a strong retail community. Within the boundaries of the proposed 2006 BIA – Queen St, from Victoria St to River St- one finds a large hospital, a city-owned parking garage, a large military facility, a park, 2 churches, a school, TCHC housing, private homes, some men’s hostels, and several social agencies. In total, this accounts for at least 50% of the frontage along Queen and would all be exempt from paying any BIA levy. So the remaining private businesses along this 1.5 km stretch of Queen East would have to carry the full financial burden of a BIA. (There were, and still are, numerous vacant storefronts on Queen East; it’s unclear whether they would be assessed “reduced rate” BIA fees).

It was frustrating that the city allowed only a very short period of time for local businesses to vote whether they wanted a BIA. Many businesses voted “no”, but 153 of these 190 “no” votes were deemed invalid by the city, since some property owners didn’t provide the city with a list of official building tenants. Another peculiar tactic was the city’s “negative billing”-like to BIA voting: businesses who didn’t vote were counted as “yes” votes. We reported these irregularities to the City Auditor, but didn’t receive any feedback. The city simply claimed that there were sufficient “yes” votes to approve creation of this BIA.

The BIA’s initial board in Jan 2007 had 20 members, unmanageably large, but acclaiming any and all interested persons seemed to be the only way that the BIA proponents could ensure they got themselves onto the board. The BIA board had unproductive monthly meetings for 2 years, as well as AGMs in Jan 2007 and Jan 2008; at both AGMs, the attending BIA members voted down proposed budgets, since many business owners wanted to dissolve this BIA which had been suddenly forced upon them. About the only thing that this BIA ever accomplished was renaming itself from “Old Queen Street BIA” to “Historic Queen East BIA”.

A motion to dissolve the BIA was approved in Jan 2008 (link) and submitted to our city councillor and other city staff on Feb 8, 2008, in accordance with city’s then-current rules; to date, the city hasn’t acted on that request. So this Queen East BIA #1 might still technically exist – who knows? For stores within the bounds of both BIA #1 and the proposed, partially overlapping new BIA #2 – would those businesses be hit with 2 separate BIA levies?

How healthy is our local business community in 2011? Well, the promised retail component of the 2 new Streetcar Development condos on King St remains vacant. The premises in the Dominion Square complex occupied by the French bookstore apparently remains vacant after 2 years. I own a small business on Queen, and it’s irksome that the idea of a Queen East BIA always seems to be promoted by persons who don’t own or operate local businesses, and so wouldn’t be affected by the mandatory annual $1,000+ surcharge to be paid by every business, to fund a BIA. (The exact amount of the levy is determined by amount of street frontage and BIA’s annual budget. For example, a $100,000 budget needs 100 businesses to each cough up $1,000.)

I hope that this “classroom theory” of possible benefits, applied by these young students who are recommending a BIA, is put into perspective: let’s remember Queen East’s recent BIA history, and consider the desires of actual local business owners. I say we should first build a stronger, “critical mass” of local businesses before taxing them with the significant costs of funding a BIA. Let the businesses decide: they are the ones who should making an informed discussion whether to create (and pay for) a Queen East BIA.

Forgive me for just jumping in about bia’s but i have some experience in this area, having worked for one for 11 years – as near as i can tell, the proposed bia is linear – and as far west as church or victoria streets – if that information is correct then it will be a real challenge to put together a cohesive plan that will benefit all commercial property owners and their tennants –

1. bias are a tax grab – the city doesn’t want to pay for street improvements these days – lots of areas have seen improvements at street level – pedestrian scale lighting, decorative sidewalk pavers – and these areas weren’t bia’s – the cabbagetown bia was being asked to pay for stuff that clearly had been bestowed upon other areas for nothing – the city realized that we were on to them and we refused to pay for stuff that other areas were getting without being forced to form a bia. but as the purse strings tighten, the city discriminates against those commercial property owners who don’t want to pay these additional bia taxes.

2. BIA’s work in areas where there is lots of street level retail or a cohesive thread or “‘look” to the neighbourhood (observe bloor yorkville bia or bloor street west bia, the heritage surrounding cabbagetown) – the linear BIA that is being suggested for queen street runs the gamut of men’s shelters, variety stores and medical buildings – try to convince the strugggling variety store owner that he should cough up a new tax so that one day (probably not in his life time) this part of queen street will attract shoppers

3. it will take time (years) to build up enough cash to pay for any project that could be undertaken – years of taxing small business owners to pay for hanging flower pots and new sidewalks…..and you have to pay for someone to co-ordinate the BIA – i’m sure there’s someone in the wings who wants to make money off the backs of small struggling businesses – i was flabbergasted when i heard of this bia plan – taxes are already too high –

4. BIA’s provide a collective voice around issues that affect businesses – however, there is such a diverse group of business owners along this part of queen street – i just can’t see lobbying for fewer social service agencies or methadone clinics when the bia membership will include those who are part of the problem.

5. I remain steadfastly opposed to a bia along this strip – i would rather see like-minded businesses and property owners take some tentative steps towards problem solving and economic development without having to hand over their hard earned money to the city – again!

Hi Trefann- thanks for that email to alert us of this possibility! Today….

I have heard that our taxes will go up, with a BIA, but ,sadly no one answer this question –
1) how much will the BIA Taxes increase per business?
2) why are they going up !!!if we are benefiting the city. with yet another another BIA
3) what benefit is provided if we become a BIA

we are a small area (no big box companies) and since G and W have their own established board….what benefit is King Street East -with joining this association. What do we glean from this action. I’m asking as an interested business. Please someone, provide me with some answers.

Update, Dec 2013)
As of today, “Historic Queen East” is still included on the City of Toronto’s
list of active BIAs.
This entry was posted in advocacy. Bookmark the permalink.