The redevelopment of Regent Park was first announced in Oct 2004. Here is the original plan (5.5 mb). To summarize:

In 2004, we were told the project would be built in 6 phases, each one to take approximately 2 years, starting Dec 2005.  Hopefully there will be money for ongoing maintenance of these new buildings (since lack of maintenance was one of the main problems with the “original” Regent Park, and is the issue for almost all TCHC owned properties.)

Numerous changes since then: 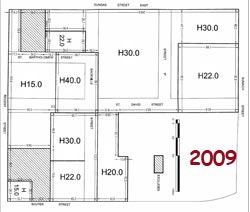 At one time, there was a dedicated, comprehensive website – www.regentparkplan.ca, and frequent newsletters – to keep everyone informed; not the case any more.  This is the one link we’ve found that summarizes what information is officially available.

I live directly across from the proposed block 23 (bounded by Shuter, Sackville and Sutton). It is now being demolished to make way for a new building encompassing this whole block. What was originally proposed , townhomes 3 to 4 stories was amended through a height zoning application to change this into an 8 story structure. We successfully challenged this and the buildings height was reduced to 6 stories. Still it is not in anyway compatible with the surrounding existing structures.
The meeting I attended for the height renewal application was the only one in which they called upon the community for input into Phase 2.
What they propose to build on block 23 is a mystery. The TCHC planners with the Daniels group have had one meeting to discuss what type of building this should be, Market, Rent Geared to Income or other type. The meeting was inconclusive .
The criteria for these decisions are another mystery.
I had asked the planners office at TCHC if they could hold a community meeting to gather input from surrounding homeowners. They stated that they are not obligated to have one.
TCHC has repeatedly stated that they are always cognizant of the bordering communities and want to work with them. I feel that I and some neighbours are being ignored.
If you want to have some input into your neighbourhood’s development and share your opinions about block 23 call the Regent Park Project Manager’s office. 416-981-5054
Or Pam McConnells office: Shawn McIntyre, 416-392-0207

I wrote to Toronto + East York Community Council, questioning the increased height zoning for this area. They met Sept 15, 2009 but there was no discussion about the rezoning, they simply approved it. (Perhaps no discussion either when this rezoning was approved by City Council a few weeks later). For details, see http://www.trefann.org/2009/06/23/conflict-of-interest

Concerning the Regent Park redevelopment: have there been any public community meetings since then?

a) attend Feb 1 meeting @ 7pm (Corktown AGM, in the back room of the Dominion on Queen) where City Councillor Pam McConnell is supposed to attend. You could ask her for an update on Regent Park. However, this might not be the best forum; past AGM meetings have been lengthy and gave little time for discussion of other topics. Regent Park renewal isn’t a priority for Corktown (which is more concerned about West Don Lands).

b) talk to your neighbours; If there is widespread concern about the lack of details about Regent Park plans for this site, then you could contact Councillor McConnell and request a community meeting to focus on this topic. She could likely arrange meeting space in Dixon Hall (or Regent Park South Community Centre, although pedestrian access from Shuter St to Sackville Green may now be blocked.)

I will be attending the Corktown AGM and would hope to have some informal discussion with Pam McConnell on the current development of block 23.
My immediate neighbours are quite concerned about the lack of information coming from TCHC and about the proposed use of this site. They will start to break ground very soon on this project but they still do not have definite plans on the type of occupancy. The proposed density will be four times maybe more, of what existed previously !
I spoke to the Regent Park Planning department to engage them in a community meeting, but have heard nothing. I had to call the Regent Park tenancy hotline because no other number existed for the public. They gave little information on this, just saying that a meeting was held with Daniels Group and the TCHC, concerning block 23, and it was rescheduled and inconclusive.
I had a promise from Pam McConnells assistant Shawn McIntyre who deals with Regent Park redevelopment for a meeting, but nothing as yet has materialized.
If you live in the immediate area and care about what type of community that is being planned for you by the TCHC and the developer, Daniels Group, then call them.
416-981-5054, Regent Park Tenancy Hotline, Shawn McIntyre/Pam McConnell, 416-392-0207.