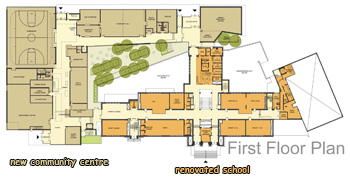 Kudos to the city for its extensive public consultations during the design process for the new Regent Park community centre. Flyers for Feb, March and April meetings were delivered door-to-door to the surrounding neighbourhood (presumably to Regent Park residents as well). Detailed plans don’t always appear on the city’s website on a timely basis, but when asked, the city has provided us with details, which we have shared on trefann.org.

The preferred design was presented on April 7:  the new Regent Park community centre will be “L-shaped”, and attached to the Nelson Mandela Park Public (“Park Public”) School, so that the school and community can both share the combined “hub” space. The school will be closed in June 2010 for an extensive, two year renovation “to accommodate 660 pupil places, a full day kindergarten, and child care centre”. The plans also show a “multi-faith” room, which seems peculiar for a public school.
In Feb 2010 we asked an obvious question:   why not put the pool, gym and other athletic facilities planned for Regent Park, in a single building?  Seems reasonable and cost effective – should reduce overall construction costs and reduce ongoing staffing/operational costs). Combined “pool+gym” facilities work well in the nearby St. Lawrence and Jimmie Simpson Rec Centres. Putting the pool in this new community centre location would mean easy access for “Park Public” schoolkids, for school swim lessons. “No, we’ve already decided to build a separate aquatic complex” was the answer (no other explanation was given).
The recently built Wellesley Community Centre (at the corner of Wellesley & Sherbourne) is a successful, popular place, partly because it includes a busy Toronto public library (TPL) branch.  Attendees at the Feb 2010 meeting suggested that a TPL branch also be incorporated into the Regent Park Community Centre – seems reasonable; the existing local TPL branch (at Parliament & Gerrard) is cramped, and would benefit from being relocated more centrally within Regent Park. Putting a library in a community centre seems ideal: offer visitors opportunities for intellectual, as well as physical, workouts. But our suggestion was casually discarded by planners: “the TPL wasn’t interested”, we were told. Instead, a large portion of the new building will be a 2 story employment centre.  (See above floor plan, or pages 26-29 of the revised plan.)

At the April 7 meeting, city staff was vague as to what employment services would be provided. Numerous local social agencies already offer employment services (Dixon Hall, Serve Canada, Salvation Army, Fred Victor, Council Fire, Toronto Youth Development and others), but the city claims their new centre “won’t duplicate existing services”. TCHC (which is wholly owned by the city) is constructing several condo buildings in the redeveloped Regent Park; the ground floor of one of these condos would seem to be a better location for an adult employment centre (instead of being part of the same “hub” building as an elementary public school), but the city is adamant that this is the “best place”. Councillor Pam McConnell listened to concerns from several parents on April 7, but we’re not hopeful of any changes. 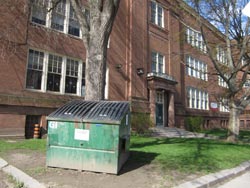 Hopefully these improvements will be realized:

This entry was posted in recreation, Regent Park. Bookmark the permalink.