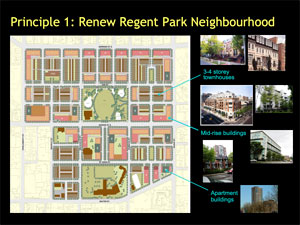 The Regent Park Athletic Fields were not part of the original plan for Regent Park redevelopment – the city’s plan published in 2004 showed new apartment buildings on this site (see image: page 10 of presentation, or view complete document in Powerpoint or PDF format)

So why the change in plans? Prior to the construction of the original Regent Park, this land was industrial. The city and Regent Park developer never advised the community whether this land was deemed too polluted for residential use. In this 2012 announcement, they simply boasted of a “new sports facilities with support from the MLSE Team Up Foundation”.

“Based on review of the available historical information, the first developed use of the Site occurred in the 1840s. From the 1840s to the early 1910s, the Phase One Property was comprised of a mixture of residential and commercial properties. A review of historical sources indicates that the Canadian Ornamental Iron Co. factory was present at the Site and the adjacent properties to the east, from the early 1910s to the late 1950s. The current outdoor hockey rink and associated changeroom / compressor building were constructed in the mid/late 1970s to early 1980s. The Booth Coulter Copper & Brass Co. Ltd. factory was present on the neighbouring property to the south from the early 1900s to the early 1960s. A foundry, copper shop, and brass finishing room were all present inside this factory.” 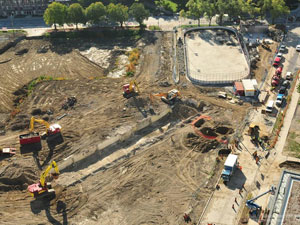 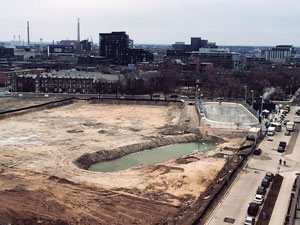 In 2014, a drainage pond was dug (perhaps to leach contaminants from the soil). Lots of contaminated soil was removed and clean soil trucked in, as required by the Ministry of the Environment (MoE). However, the soil located immediately below the existing hockey rink was not tested; it is possible that this soil is equally contaminated.

Just west of the hockey rink is a new 12 story seniors residential building: the Sumach (Chartwell) building. Is the Chartwell site just as contaminated as the Athletic Field? No info in the MoE database, but maybe no environmental testing was required here since no change in use (previously residential). 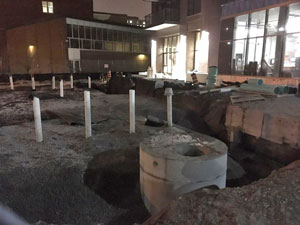 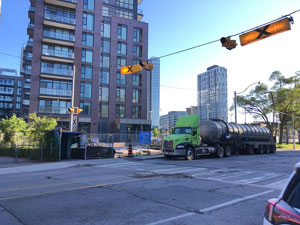 However, once building construction was complete, a 6 foot deep gravel-filled pit and mysterious drainage tubes were installed immediately south of the building (at the corner of Sumach & Shuter). Every few weeks during the fall of 2019, a GFL environmental tanker truck appeared at the site of these drainage tubes, and stayed for a few hours each time – removing contaminants perhaps; who knows? (Just west of the Chartwell is the school, where contaminated? soil was excavated and removed in 2012.)

This entry was posted in environment, Regent Park. Bookmark the permalink.