Secure posts for locking a bike are important public infrastructure, if the city wants to encourage more persons to cycle. (Especially now, given rampant levels of bike theft in Toronto).

Toronto’s original bike ring was designed in 1984, and a large number were installed in 2000. By 2006 the city realized that this un-reinforced single-ring design was easily vandalized (and bikes stolen), so the city developed a reinforced design (see history of Toronto’s bike rings). The city has replaced some, but not all of the old single-ring style posts. 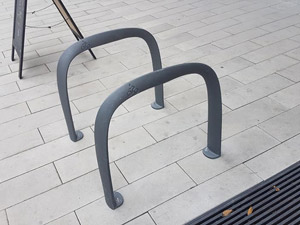 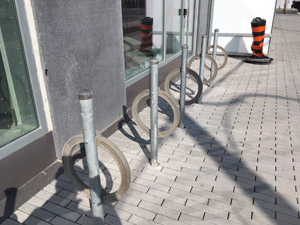 Given these successive design improvements, we were disappointed to see in 2019 that Toronto Community Housing (TCHC) and the Daniels Corporation were still installing the obsolete, easily vandalized “single” ring design (twelve years! after serious flaws noted with this design). However, a photo and complaint sent to the city and to TCHC in April 2019 about these flawed bike rings didn’t result in any changes.

This month, an even less secure bike ring appeared in Regent Park (see photo, above right).

Widespread provision of enough secure bike parking in Toronto simply doesn’t appear to be a high priority. The city has numerous types of bike parking, but apparently no recent guidelines for the implementation of each type, and no periodic surveys to determine specific areas of the city where there is an unmet demand for bike parking (The city’s website has a link to a 2008 document Guidelines for Bicycle Parking Facilities.) The city started work on a Bike Parking Strategy in 2016, which was expected to be completed by 2019. To date, no draft reports have been made public. The bike parking strategy seems to be “on hold”; in Jan 2020 the city’s project manager said they “can’t give a date on when it will be finished.”

Cycle Toronto’s Bike Parking working group was initiated in Sept 2016, and met monthly for a few years, but apparently it has not produced any deliverables. In 2018, one group member inventoried types of bike rings currently found in Toronto.

The city has fastidiously documented the location (but not current repair status) of 17,500+ bike rings located on city property (see map), although this map isn’t current (eg. bike rings on the SW corner of Sumach & Shuter not shown). A volunteer community-built app demonstrates how problems could be reported (eg. broken/insecure ring). Repair requests can already be reported to 311 via email; tracking and timely resolution of these requests would be really useful.