Shuter St design – how well does it work?

Shuter St, from Sherbourne to River, was completely reconstructed in 2020. This roadwork was long overdue; for many years, he pavement was uneven, bumpy, full of potholes, poorly patched. Also in 2020, Toronto put a protected bike lane on Shuter: bikes travel next to the curb/sidewalk, separated by a concrete curb from parked cars to the left.

One year later: how is this road design working? From Sherbourne to Parliament, Shuter St and its bike lanes appear to function well, with few conflicts. On the north side of Shuter, all of the cross-roads are one-way, leading away from Shuter. Moss Park Apartments occupies the entire block on the south; only 2 entrances on the south side of Shuter. 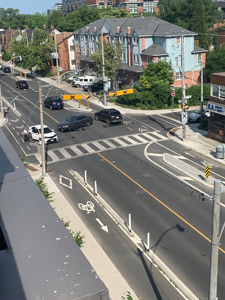 However, on Shuter from Parliament to River, there are numerous lanes, and most cross-roads are two-way, resulting in lots of vehicular traffic entering Shuter. These vehicles need to proceed with extreme caution to avoid pedestrians on the sidewalk; drivers also must check for oncoming traffic in 2 different locations: in the bike lane and then the roadway. Drivers cannot see oncoming Shuter vehicles since visibility blocked by cars parked on Shuter. To further challenge motorists, street directions change: Sackville St is one-way north (Queen to Shuter), then two-way, (Shuter to Dundas), then one-way south (Dundas to Wellesley). Similarly, Sumach St is one-way south (Shuter to King), then two-way (Shuter to Gerrard), then one-way north (Gerrard to Wellesley). No surprise that accidents occur (see June 20 photo of Sackville/Shuter).

Traffic on Shuter St seems to have increased, partly because there are no traffic lights or streetcars (unlike on Queen or Dundas). This makes Shuter more desirable for motorists; some vehicles greatly exceed the 40 km speed limit, especially late at night. The bike lane is also busy; lots of “near misses” when persons cross the bike lane when walking from their parked cars to the sidewalk, or when pedestrians momentarily step into the bike lane to avoid sidewalk obstacles (garbage bins) or groups of other pedestrians. The bike lane can be problematic for other cyclists since fast-moving e-bikes and e-scooters often use the bike lane illegally, even more dangerous when they travel in the wrong direction! This design – a confined bike lane, fenced in by parked cars – is not a solution preferred by all cyclists.

Since the amount of street parking on Shuter was reduced, Canada Post and other delivery vehicles often stop and block the bike lane, in spite of its “protected” design. A big problem with all bike lanes in Toronto is the total lack of police enforcement, to keep cars from obstructing cyclists. For several blocks of Shuter St, there is no longer any parking in front of houses, so how can those residents hire a moving van or have new furniture delivered, without blocking the bike lane? No problem for city operations though; garbage trucks frequently drive over (and damage) the reflective bollards and concrete curbs, while obstructing the bike lane. 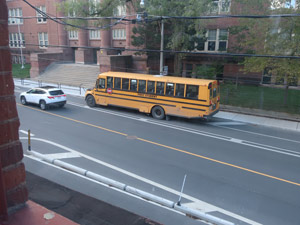 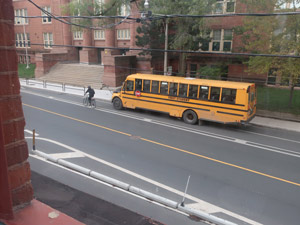 Some parking on Shuter was eliminated to allow a large (100 metre) loading area for school buses to safely co-exist with the “protected” bike lane. A safe design in theory, but not in practice since bus operators ignore signs and pavement markings, which delimit the zone for buses. Every weekday, morning and evening, a school bus blocks the bike lane unnecessarily, forcing cyclists into the westbound car lane. Unsafe!

For the past 20 years, Shuter has been restricted to 2 lanes, and 40 km speed. The introduction of protected bike lanes has further narrowed and complicated the roadway. There is a significant number of residential homes which front onto Shuter. Isn’t this part of Shuter really a residential street, and not a major arterial road like Queen and Dundas? The city should consider traffic calming measures for Shuter: traffic lights, 4 way stops, speed bumps.

This entry was posted in cycling, Shuter St. Bookmark the permalink.