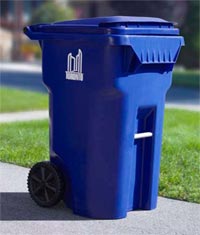 Toronto wants everyone – downtowners as well as suburbanites – to use large wheeled bins for recyclables, garbage (and eventually, a 3rd large bin for organic waste). This plan was approved in June 2007, but until recently, no recognition that “big bins” might not be feasible in downtown neighbourhoods. In early January, the city made a rushed attempt to force acceptance of the bins: a brochure giving Trefann Court residents 10 days to choose a bin size, no small bins (only medium, large, or jumbo), large bin by default, information meetings only a few days before the deadline for ordering bins. After considerable opposition, the City’s only compromise for Ward 28 is a “one bin pilot”: use the same bin for garbage and recyclables, on alternate weeks.

No one likes being lied to by their government. The city’s stated rationale for the bins is to “increase recycling”; not mentioned are the real benefits:
1) mechanized garbage collection (use hoists to lift and empty these bins into the garbage truck), and
2) user-pay “garbage fees” (starting in Nov) set at an amount to ensure extra revenue for the city

Objections have been voiced on the Urban Toronto discussion board:
– large bins will occupy lots of sidewalk space, making it difficult for persons in wheelchairs or pushing a stroller to get by
– challenge of manoeuvring bins around snow banks and parked cars

The newspapers have reported on the controversy with these big bins.
– In a Jan 20 article in the Toronto Sun, it was suggested that one motivation for the bins is to “pay back the CUPE unions for supporting Mayor David Miller in the 2006 election”.
– And on March 25, the Sun asked whether the entire exclusive Cabbagetown area had been granted an exemption from having to use these big bins ?

Toronto Star articles:
Jan 8 (includes a video),
Jan 26 – reasons from the city why bag collection would be problematic,
Jan 29 – suggests that residents revolt, similar to 1773 Boston Tea Party,
Jan 30 – where Mayor Miller asserts that for downtown residents, the new bins are “easier for people to use”,
Feb 8 – estimated garbage fees, now more than anticipated,
Feb 13 – suggests garbage collection fee might be “extra City revenue”, not just a “user-pay fee” calculated to cover costs, and
Feb 22 – challenges of proposed bins for Ward 19

Hopefully some creative thinking and co-operation among downtown residents associations can produce some viable alternatives to these monster bins, that will still achieve our recycling goals.

(Updated to add links to Feb 22 and March 25 newspaper reports.)

I can’t imagine how the mechanized arms will reach around parked cars to get at the recycling bins. But I do know I need a large bin (I have more than 4 blue boxes at my place because of the extraordinary amount of bottled pop, pizza pockets and other packaged foods my sister eats). We don’t have that much actual garbage though. I would only need a small garbage bin when they’re rolled out (resulting in a $10 rebate). However, the one-bin solution for Ward 28 would have me using my large recycle bin for garbage… and thus presumably pay the City $133/yr instead of get the $10 rebate. Sounds like it’s not the solution for me.

This entry was posted in waste management. Bookmark the permalink.