It’s been almost a year since TCHC met with residents living adjacent to Regent Park, to give us an update. For several months, Shuter St has been clogged with mud, from TCHC and TDSB construction activity (see photos).  In response to TCHC’s meeting invite, a week before the meeting, we replied:

Please invite someone from TDSB (school board) who is knowledgeable about the renovation of Nelson Mandela Park Public School. Their construction is also affecting the neighbourhood. The neighbourhood needs a single point of contact to address concerns – hopefully this “Community Construction Liaison Committee” will be that single point of contact.

TDSB was a “no show”, without offering any explanation. 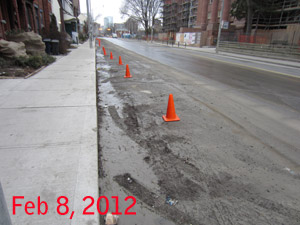 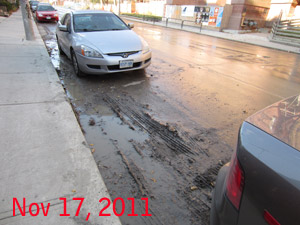 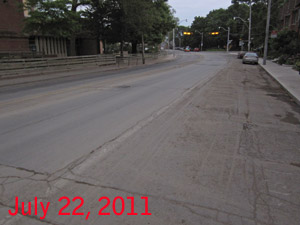 Here is a copy of TCHC’s presentation, given Feb 29, and minutes prepared by CPLC.  Trefann Court’s highlights from this meeting:

To reduce the large amounts on mud tracked onto Shuter Street by construction trucks accessing the site, the contractor is finally implementing a truck washing station (on Sackville north of Shuter), mud mats, and repeated an earlier promise to spread calcite on roadways, to control the dust. The Daniels Corporation representative claimed that an employee inspects the entire area surrounding the Regent Park construction site throughout each day, and takes immediate action to remedy any negative impacts, including the removal of dirt from nearby streets.

Glenn Gustafson (Councillor McConnell’s rep) attended this meeting, and was told that the dirt can accumulate 2 inches deep in the eastbound curb lane of Shuter. Three hour parking is currently permitted; in practice vehicles park here throughout the day and night, so and the curb lane doesn’t get cleaned for several months at a time. More parking enforcement won’t solve this problem; we’re expecting prompt action from the councillor to implement temporary parking restrictions (eg. no parking on 15th and 30th of each month) so that the increased accumulation of dirt/debris from construction traffic is periodically cleaned off the street.

According to TCHC, the school is scheduled to re-open in Sept 2012, even though it will still be in the middle of a construction zone.  One resident suggested:  to avoid exposing school children to high levels of dust, construction traffic and other potential safety hazards resulting from ongoing Regent Park phase 2 reconstruction, the school re-opening should be delayed for a year. A seemingly reasonable suggestion, but no one from the school board was in attendance at this meeting to listen/respond.

Still no decision yet, on whether “block 23” (NW corner of Sackville and Shuter) will be rental or market condos. TCHC promised to advise this committee as soon as their decision is made public.

(Corktown Association also attended this meeting; here is their summary.)

(TCHC provided this clarification re: re-opening of Sackville St)

Currently, Sackville Green up to the turning circle (near the community centre) is owned by the City. Its one of the only Regent Park internal streets that is not owned by TCHC. It currently has the existing city services, so does not need to be fully reconstructed underground as do the other streets in Regent Park. We will bring it up to the quality of the other new roads in Regent Park on the timeline shown on the presentation. When we are ready to open Sackville Street in 2012, it is likely that we will also provide a minimum of sidewalk access to bicycle and pedestrian traffic on Sackville Green.

Thank you for the questions with regards to Nelson Mandela Park Public School. In response to your questions:

Question: the school is scheduled to re-open in Sept 2012, even though it will still be in the middle of a construction zone. A Blevins Place resident attending the Feb 29 meeting suggested that to avoid exposing school children to high levels of dust, construction traffic and other potential safety hazards resulting from ongoing Regent Park reconstruction, that the school re-opening be delayed for a year. Is that possible? If not, any specific steps planned to ensure the safety of children walking to/from the school ?

Nelson Mandela Park PS will have occupancy and the school opening is planned for September 2012. The connecting community centre will be under construction during that time. As per the construction schedule, the Community Centre is to be completed by September 2013. The Community Centre construction site will be hoarded by the Contractor working for the construction company for this site. The noise and dust will be controlled by the City/Community centre contractor. A joint meeting with the City and school board in this regard is necessary for the safety of the children and for noises and dust control. We will work together and keep the safety of our students as having the utmost importance.

Question: the last neighbourhood meeting concerning the school was April 7, 2010; see http://www.trefann.org/2010/04/08/community-centre-update/ Prior to 2010, school buses stopped directly in front of the school several times each day for loading/unloading passengers. Shuter is a busy street, the road is marked “no stopping”, and buses which stop here block the west-bound bike lane. This was an unsafe situation for cyclists as well as for the bus passengers.

Once Regent Park roadways are rebuilt (should be completed by Sept 2012), does TDSB plan to use one of lower traffic adjacent streets (Sackville, Sumach or St. David’s) for all school buses, instead of Shuter ?
(This suggestion was made to meeting organizers in April 2010).

As per Site Plans, there will be 3 drop off areas around the school:

Hope this addresses some of your questions.