The Sumach St contra-flow bike lane was finished Oct 15. Back in 2015, the road at Sumach & King was painted to delineate the bike lane, that paint was removed in 2019 and then repainted in 2020. The traffic light at Queen (see photo at right: Queen & Sumach, looking north) was installed in February, so the only other work was 2 blocks of roadway paint, and removal of parking signs on the east side of Sumach. No bicycle-activated sensor loop is embedded in the roadway for north-bound cyclists at Queen & Sumach, so cyclists might be waiting a long time for the light to change.

The Sumach bike lane connects to the existing bike lane on Cherry St. The photos below show Cherry & Sumach, looking north to King; streetcars turn left, most cars turn right, bikes in the middle. Perhaps this intersection could be made safer for cyclists wanting to continue north on the Sumach contraflow bike lane eg. separate traffic signal for northbound cyclists? The signage at King & Sumach says “bike lane starts”, which isn’t true – isn’t this a continuation of the Cherry St bike lane ? 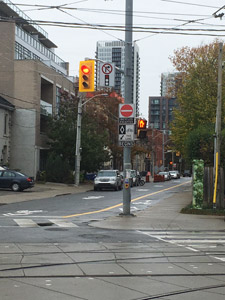 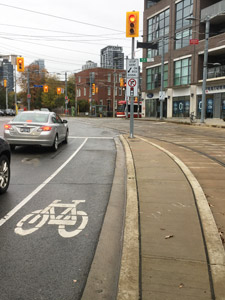 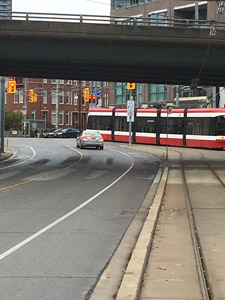 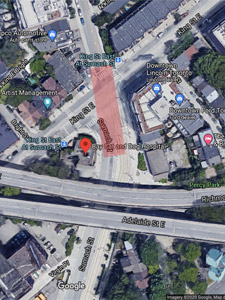