A contra-flow bike lane on Sumach is a good idea. Should be simple; from Shuter to Queen to King is only 2 blocks. Currently, the only routes in the immediate area for north-bound cycling from King to Queen are on River, Parliament, or Power (where it is difficult to cross fast-moving traffic on Adelaide and Richmond).

When the King-Sumach intersection was rebuilt in 2015, lines were painted on Sumach St just north of the intersection, for a future contra-flow bike lane (see photo below, left). Contra-flow biking on Sumach St was not yet legal, however these painted lines on the road misled cyclists to think that north-bound biking on Sumach was permitted. Cyclists did so frequently, which created an unsafe situation. The city was negligent in letting this painted faux “contra-flow” bike lane remain on Sumach for 4 years, without completing this project. When local bike advocates met with Shawn Dillon (City of Toronto Cycling Infrastructure) in June 2017, he said: 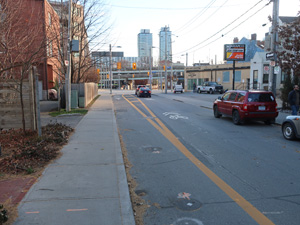 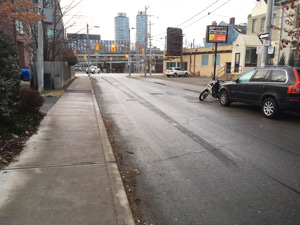 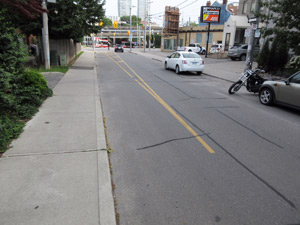 “By the end of this year [2019], the major work happening on Adelaide Street … should be complete,along with the new contra-flow tracks being installed along Sumach Street between Shuter Street and Richmond Street [sic] .” 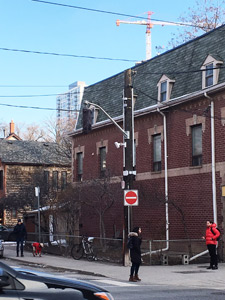 Presumably, she is referring to the planned 2-block long contra-flow bike lane between King and Shuter (Richmond ends at Parliament).

Progress remains slow: after 4 years, the painted lines on Sumach north of Queen were removed in Dec 2019 (see photo above, centre). In Feb 2020, a contra-flow traffic light was installed on the north-east corner of Queen and Sumach. Apparently, no longer any intention to put signalized intersection at Shuter-Sumach, according to the latest plans for the Shuter bike lane.