The map on the left is a reproduction from the 1858 book “The hand-book of Toronto”. It shows North Park St, running from Sumach to 1 block west of Berkeley. (Also this map shows a street called Sidenham, located just N of Queen, running 1 block between Berkeley and Parliament.) 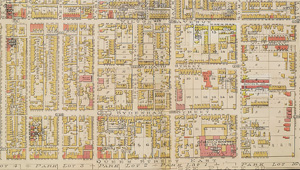 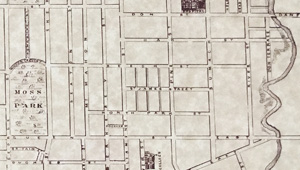 In 1870, North Park St was renamed Sydenham St; see 1903 map, above. (This is one of the fire insurance plans published by Charles Goad, which provided detailed information about buildings and neighbourhoods.) Sydenham was a quiet 2 lane street; Park Public School (now Nelson Mandela School) appears in this May 23 1952 photo of Sydenham street, looking east (River street is in the distance). Compare to photo taken at the same location, in early 2000s.
20001952 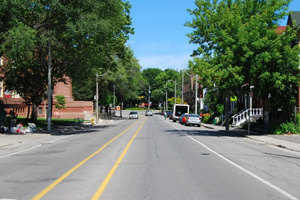 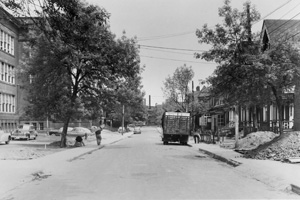 In 1953, Shuter St was extended east, by jogging south slightly to align with Sydenham, which was renamed Shuter. Presumably, it was widened to 4 lanes at that time.

On this 1967 map, the street running from Tracey to Sackville, between Queen and Sumach, not yet shown. When that new street was constructed, it was named Sydenham St.

In 1999, Shuter was narrowed to 2 lanes, painted bike lanes were added, as well as street parking on the south side of Shuter, east of Parliament. One downside was that the street was never cleaned (winter or summer), due to street parking. As with bike lanes elsewhere in the city, cars and construction vehicles often park in the bike lane; the lane was sometimes illegally obstructed with construction materials, or by film crews. The city is planning to install protected bike lanes on Shuter in 2020.

For more historical information and photos of the original Sydenham St, see

This entry was posted in history, Shuter St. Bookmark the permalink.