June 26 was the 2nd meeting of the “Regent Park Community Construction Liaison Committee”.  No Regent Park residents attended; neither did the contractor. See meeting minutes and TCHC’s presentation; following is our account of this meeting. 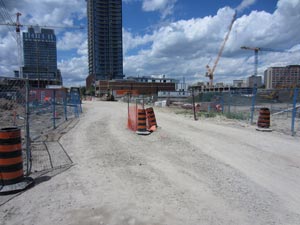 The problem of construction dirt on Shuter St – on the road, and accumulating on the south side of the street – remains unresolved.  In 2011, as well as operating a sweeper truck, the contractor periodically “washed” the street via tanker truck.  This year, only sweeping (no street washing) in spite of this promise 6 months ago, from TCHC.

No continuity from Councillor Pam McConnell’s office – for this 2nd meeting, Sean McIntyre attended (previous meeting, Pam’s rep was Glenn Gustafson).  Sean advised that the city will study the feasibility of parking on alternate sides of the street (to allow periodic cleaning of the south side of the street). Glenn made the same suggestion four months ago, and TCHC’s Tom Burr said the same thing eight months ago, so no progress. Pam McConnell was already our city councillor when bike lanes (and street parking) were added to Shuter in 2002 – 10 years later, and the city and Pam still have no plan for adequate street cleaning.  Since April, TTC buses (replacing the 501 streetcar) have detoured along Shuter; these large vehicles stir up all of the dust at the side of the road – see June 12 video of delivery van (buses have same “suction” effect). Can you tolerate the TTC buses on Shuter until the end of October?

(Two city workers used brooms and shovels on June 29, and worked between parked cars, to scoop up some of the dirt on the south side of Shuter, but lots of dirt still remains.)

TCHC admitted that one promised dirt control technique – wheel wash station – wasn’t implemented (in spite of their written commitment:  see Feb 29 presentation, page 12; and Feb 29 minutes)  Now they are hinting “it’s too expensive”, so one questions whether our concerns are taken seriously. TCHC’s contractor uses a 4 foot pile of dirt to hold up a fence (see photo, above) – obviously not serious about minimizing dirt which blows around the site. TCHC claimed that “mudmats” were implemented on access roads, but how much “mud prevention” is provided by this bit of gravel on Sackville ? (see photo). 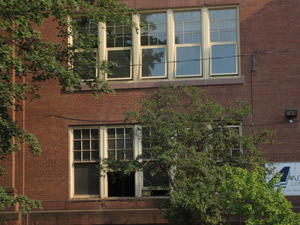 The school board (TDSB) did attend this meeting, and presented a timeline for completion of school renovations in time for Sept 3 opening.  An official “public open house” is tentatively planned for Sept 13.  The school will be heated via the central Regent Park energy plant, which should be an improvement (residents directly across the street should no longer experience the loud rumbling noise that previously emanated from the school’s furnace).  TDSB’s extensive renovation of the school is planned to meet silver LEED standard (for energy efficiency).  New windows were installed on the 2nd and 3rd floor, but the old windows remain on the 1st floor (see June 28 photo) – hard to imagine that these old windows give good noise or temperature insulation. (TDSB is likely running out of time or money, but wouldn’t admit it when asked).  In terms of construction dirt, TDSB claims that they will clean the street “on request” – doubtful that works (who requests? how quickly does cleaning occur?).  TDSB will remind their contractor to respect the noise bylaw, concerning early morning construction activity on weekdays and on Saturday.

We were told by TCHC that the Aquatic Centre should open early Aug 2012, and the Arts Centre in Sept; the Community Centre (still not started) now has a promised completion date of Sept 2013.