Watch Your Speed (WYS) signs are part of Toronto’s Vision Zero program: to “improve safety across our city using a data-driven and targeted approach, focusing on the locations where improvements are most needed”. WYS signs are solar-powered digital displays which show motorists the speed their vehicles are traveling, in order to encourage them to slow down. In Toronto, as of Dec 2021, there were 450 WYS sign locations (signs listed as currently active, ie. no end date). Signs listed for Ward 13: 83, 90 Alexander Street; 5 Maitland Place; 395, 446 Queen Street East; 80 Sackville Street; 417, 437, 444 Sherbourne Street

Most of Toronto’s WYS signs display vehicle speeds from 7am-9pm; however, all signs are collecting speed data 24 hours each day (assuming that their solar-powered batteries retain sufficient power). And all of that data is publicly accessible on Toronto’s Open Data website.

Approximately one year ago, two WYC signs were installed near Nelson Mandela School: a sign near 440 Shuter tracks westbound traffic; near 437 Shuter is a sign monitoring eastbound traffic. In Nov 2021 I asked why the Shuter WYS signs weren’t included in the city’s list of sign locations. The city’s reply: “You have discovered an issue with our data pipeline that is preventing new School Zone signs from having their data published to OpenData.” 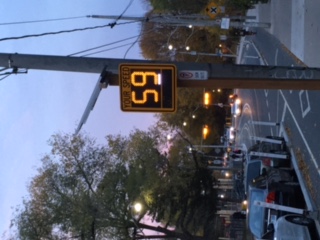 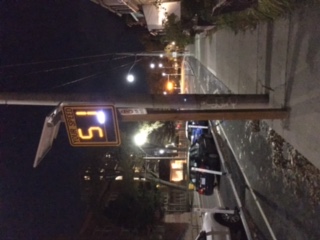 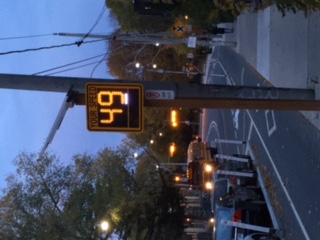 I assumed that these Shuter WYS signs were still collecting data (even though that data isn’t shown online in the city’s “Detailed Speed Counts” file), so I requested “detailed” data, for Oct 2021, for the two WYS signs near Nelson Mandela School. Another problem! The city advised me: “For some reason the sign at 440 Shuter hasn’t produced data since mid-April 2021 and we are looking into that.”

An analysis of Oct 2021 data found an average of 1227 vehicles daily travelling eastbound were recorded by one WYS sign: 34.7% vehicles exceeded 40 km/h; an additional 4.6% (or 56 vehicles daily, on average) exceeded 50 km/h. Fastest records for the month: 47 vehicles travelling 60+ km/h, 6 travelling 65+ and 2 travelling 70+. Unlikely these were all police, fire or EMS vehicles answering emergency calls!

As a result of a petition submitted by Shuter St residents, the city agreed on Nov 24 to reduce the speed limit to 30 km/h on Shuter Street between Yonge Street and River Street, “as soon as possible”