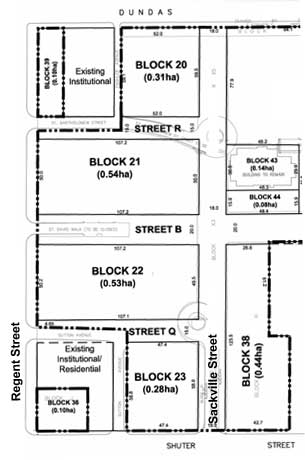 On March 17, several Shuter residents met with TCHC staff, to get an update on the status of Regent Park phase 2 development.  According to TCHC:

Thanks to Claudio on Shuter St for making this meeting happen; thanks also to TCHC staff for a very informative presentation and discussion.  The Trefann Court Association looks forward to ongoing information sharing meetings with TCHC.

Update, March 2011)
from James (Queen St resident):
This article is great thank you. Because of the overabundance of community housing in our area, I really hope that Block 23 becomes market-priced condos. I am actually way less concerned with height than I am with usage. (It seems to me that the outskirts of the new areas being built that are near to Corktown/Trefann get the low-income investments and enough is enough 100’s of units ago.)
This entry was posted in Regent Park. Bookmark the permalink.